The Dodgers have made a huge splash in the trade market: they have acquired Max Scherzer and Trea Turner from the Washington Nationals for a load of prospects. This is exactly the trade that we needed. Scherzer, who will eventually be a Hall of Famer, is still an excellent and durable starter; and Turner is an outstanding infielder (who is also rather underrated, in my view, even amidst the wide recognition of his excellence), and I wouldn't be surprised if he eventually also makes the Hall of Fame. Just before then, the Dodgers also acquired pitcher Danny Duffy from the Royals.

Note: I didn't post this yesterday because I wanted to wait until the deal with the Nationals was done, rather than being something that the Dodgers were "finalizing".

XKCD nailed it yet again, especially with the mouseover text.

Here is my current mathematics genealogy. 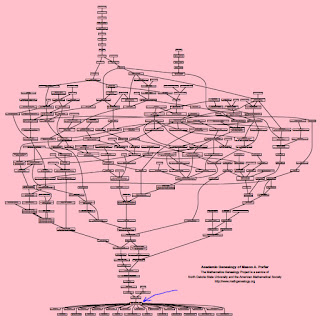 My current Mathematics Genealogy (with doctoral students only): https://t.co/EAOiY0tasi

The paper based on one of my old projects finally appeared in final form. Here are some details.

Abstract: Network theory is a useful framework for studying interconnected systems of interacting entities. Many networked systems evolve continuously in time, but most existing methods for the analysis of time-dependent networks rely on discrete or discretized time. In this paper, we propose an approach for studying networks that evolve in continuous time by distinguishing between interactions, which we model as discrete contacts, and ties, which encode the strengths of relationships over time. To illustrate our tie-decay network formalism, we adapt the well-known PageRank centrality score to our tie-decay framework in a mathematically tractable and computationally efficient way. We apply this framework to a synthetic example and then use it to study a network of retweets during the 2012 National Health Service controversy in the United Kingdom. Our work also provides guidance for similar generalizations of other tools from network theory to continuous-time networks with tie decay, including for applications to streaming data.