The great writer Harlan Ellison (who contributed much to science fiction, as well as other genres) died today.

Here is a picture with him at Dragon*Con in 2003. He complimented me on the shirt I was wearing, and rolled his eyes to signal to me (while I was waiting patiently at the front of the line) that the person in front of me in line for his autograph (who gave him tons and tons of things to sign) was an idiot. For me, he signed a well-read copy of the 35-year retrospective of his work, and he agreed to be in the picture below. Unlike recent Dragon*Cons, Ellison's autograph was free. He seemed to appreciate the fact that I had obviously read the book that I asked him to sign. 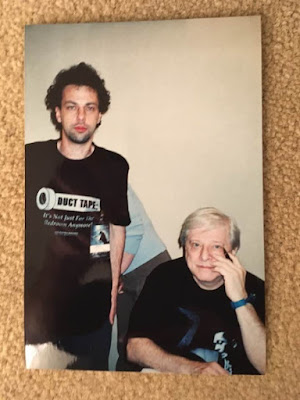 Update: Here is an obituary from The Nerdist.
Posted by Mason at 12:45:00 PM No comments:
Labels: authors, obituaries, science fiction, writers

Here is another living network, as one can see especially prominently in the right panel.

Other examples of living networks are fungal networks.

(Tip of the cap to Jessica Rosenkrantz.)
Posted by Mason at 1:31:00 AM No comments:
Labels: animals, fungi, life, networks, social media, twitter

I think they found it.

Yet Another Amazing Tiling from Tiling Bot

Tiling Bot has been producing lots of amazing (and often gorgeous) tilings on Twitter. Today's is one of my favorites.

I arrived in Oxford last Sunday and will be here for a while, staying in Somerville and hanging out with my peeps (including some of my former students) from College as well as the Mathematical Institute. It's great to still be part of the extended family!

I'll also be participating and speaking at Howison-fest, a workshop in honor of Sam Howison's 60th birthday.
Posted by Mason at 4:55:00 AM No comments:
Labels: collaborators, friends, me, Oxford, Somerville, students, talks, travel, workshops

Naturally, when I see "FU", the first term that comes to mind is "fundamental unit". 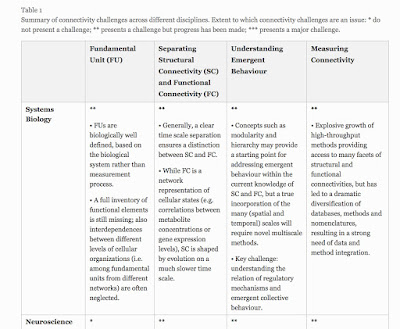 This screenshot is from this new paper.


A surface obtained by gluing six heptagons. Universal cover in the Poincaré model (the same character shown = the same point of the surface). Weapons to show that this is not orientable (it has Euler characteristic -1). Constructed by DivisionByZero [ https://t.co/zgD3J7pG4f ] pic.twitter.com/J1MzJKCkYl

This is a great visual illusion!


The image appears to bulge out, though it consists of squares aligned vertically and horizontally. pic.twitter.com/uwb0HJPyiw

I may have been slightly snarky. :)

Here is a cool 'Quick Study' about "apple seismology".

Quoting the article's lead: Just as an earthquake’s seismic waves reveal properties of Earth’s interior, elastic surface waves on an apple can tell us about what’s going on inside the fruit.

This research may be a contender for an Ig Nobel prize.

An Alternative to a Faculty Retreat

Instead of having a Faculty Retreat, why don't we have a Faculty Victory this time?

#justsaying
Posted by Mason at 8:18:00 AM No comments:
Labels: academia, me, snark, words

"Yesterday's" home run by Juan Soto, in a game that was suspended May 15th and completed yesterday, will be part of a great trivia question in the future.

Quoting from the article to which I linked:

On Monday, the Washington Nationals rookie crushed a tiebreaking, pinch-hit, two-run homer against the New York Yankees in the continuation of a game that started May 15 — five days before his big league debut.

According to the Elias Sports Bureau, Soto's blast will not be considered his first major league homer, but it will be counted as a home run hit on May 15.

One of my papers came out in final published form a few days ago. Here are some details. (Also see the paper's supplementary material for an interview with the first author, my former D.Phil. student Birgit Brüggemeier.)

Adrián Beltré now has more MLB hits than any other non-US-born player who ever played the game!

He passed Ichiro in the game that ended a few hours ago.

What Happens in Paris Stays in Paris

I am at the airport. I'll be heading to Paris for NetSci 2018!
Posted by Mason at 1:39:00 PM No comments:
Labels: conferences, me, networks, travel


LaTeX is so much better when you have emoji. pic.twitter.com/SYxgUXpWYN

I'm happy to announce the triumphant return of The Power Law Shop!https://t.co/1sgZacqhhv

We're trying to fill a universal and critical need for scale-free swag.

Jack and Jill had Issues

Well, I just didn’t realise that Jack and Jill had so many mishaps as well as falling down the hill. Here are some, as recounted in this little 1806 chap book, just 212 years ago https://t.co/SnLDtBTCia pic.twitter.com/mBkro0bvmn

Mathematics is an Experimental Science


'Mathematics is an experimental science, and definitions do not come first, but later on.' -- Oliver Heaviside

(Tip of the cap to Steve Strogatz.)

A Brief Celebration of #NationalDonutDay

In honor of #NationalDonutDay, which is apparently today.

P.S. There is a day for everything. pic.twitter.com/3zze0exZJr