New XKCD: "Real Analysis is Way Realer Than I Expected."

Posted by Mason at 9:48:00 AM No comments:
Labels: analysis, awesome, comics, mathematics, xkcd

I'll be in London for a couple of days for a meeting with one of my industrial collaborators and the Royal Society Workshop on Mathematics for the Modern Economy. Come to the workshop!
Posted by Mason at 2:19:00 AM No comments:
Labels: Big Data, collaborations, data, data analytics, data science, me, research, seminars, travel, workshops

Saturday 24 June marked the 30th anniversary of Spaceballs, one of the best movies of all time.
Posted by Mason at 1:07:00 AM No comments:
Labels: anniversaries, awesome, movies, Spaceballs

The National Maritime Museum (one of the Royal Museums of Greenwich) has a really cool collection of historical sea charts and maps. It would be really cool to do some research involving them!

Check out the awesome patterns on this dragonfly!

(Tip of the cap to Meghan Duffy.)
Posted by Mason at 12:00:00 PM No comments:
Labels: animals, awesome, insects, nature, patterns

Comic Strip: It's All Euclid's Fault

I like today's SMBC comic strip, which is about angles (and non-Euclidean geometry).

I especially like the last panel.
Posted by Mason at 1:07:00 PM No comments:
Labels: amusing, comics, geometry, mathematics

I arrived in Oxford on Wednesday for my yearly visit this year. (I plan visits for the next couple of years as well.) I'll be giving a talk tomorrow at the Somerville Maths Reunion and will also be going to the Principal's Farewell Gaudy (which covers matriculation years "after"—which perhaps actually means "since"?—2007). Several of my former Somerville undergrads will be at the math reunion, and a significantly larger number of them will be at the gaudy, so I'll get to see lots of my former students tomorrow! Sweet!

While I am based in Oxford for a bit, I'll spend a couple days in London as part of the Mathematics for the Modern Economy workshop (where I will also be giving a talk), will spend a weekend visiting friends in Newcastle, and will head to Nottingham for a day for a collaboration that is just starting up.
Posted by Mason at 1:04:00 PM No comments:
Labels: applied mathematics, awesome, mathematics, me, Oxford, seminars, Somerville, travel

I have a new paper out in final form today. This one took quite a lot of effort to write and to polish the exposition.

Title: Modeling the Lowest-Cost Splitting of a Herd of Cows by Optimizing a Cost Function

Abstract: Animals live in groups to defend against predation and to obtain food. However, for some animals—especially ones that spend long periods of time feeding—there are costs if a group chooses to move on before their nutritional needs are satisfied. If the conflict between feeding and keeping up with a group becomes too large, it may be advantageous for some groups of animals to split into subgroups with similar nutritional needs. We model the costs and benefits of splitting in a herd of cows using a cost function that quantifies individual variation in hunger, desire to lie down, and predation risk. We model the costs associated with hunger and lying desire as the standard deviations of individuals within a group, and we model predation risk as an inverse exponential function of the group size. We minimize the cost function over all plausible groups that can arise from a given herd and study the dynamics of group splitting. We examine how the cow dynamics and cost function depend on the parameters in the model and consider two biologically-motivated examples: (1) group switching and group fission in a herd of relatively homogeneous cows, and (2) a herd with an equal number of adult males (larger animals) and adult females (smaller animals).

Chaos, the journal in which we published our paper, decided to write a press release. Thus far, our work has been covered by Wired.
Posted by Mason at 11:08:00 AM No comments:
Labels: applied mathematics, complex systems, cows, dynamical systems, publications, zoology

Congratulations to Hall Daily on his Retirement!

Hall Daily, Caltech's Director for Government Relations, is retiring after a long tenure on the job.

Back in my undergrad era, Hall Daily was also the advisor for The California Tech (our student newspaper), of which I was a writer and co-editor. I learned a ton about journalism from Hall. He too someone who was someone who Autumn Looijen and I purposely earmarked as getting one of our free copies of Legends of Caltech III. He was an awesome advisor, and I owe a lot to him for my communication and journalistic skills. My experience with The Tech was probably more important for my career than any math or science class I ever took.


Posted by Mason at 10:52:00 AM No comments:
Labels: Caltech, mentors, newspapers, retirements, The Tech

How Do People from Different Cultures Draw Circles?

Here is a really interesting article about how people from different cultures draw circles.

I was once — well, at least once — told in elementary school that I was drawing circles the wrong way (because I was using the wrong sense around the clock). I think I responded with the definition of a circle and that the definition doesn't depend on the sense in which one draws it, and I think my teacher did not appreciate that.

On a similar note, in high school, I once lost 50% of the point total on an answer for misspelling ellipse (by using one 'l' instead of two), which was the correct answer. I called bullshit (on the grounds that it was my mathematics knowledge that was being tested), but unfortunately I lost.

More closely related to the article, one thing I noticed in the UK is that the most common way to write an 'x' there is with two arcs, so that they won't always cross if one writes quickly. In contrast, I write two attempts at lines that explicitly cross. (I haven't checked if this is US versus UK convention.)

And, indeed, most Americans drew their circles counterclockwise in this data set, and I draw mine clockwise.

Update: Here is a lovely quote from the article: In a 1977 paper Theodore Blau, then-president of the American Psychological Association and creator of the torque test, argued that drawing clockwise circles was a sign of learning and behavioral aberrance.

Participating in Commencement Ceremonies: Be Prepared

When participating in a commencement ceremony, it is important to come prepared. 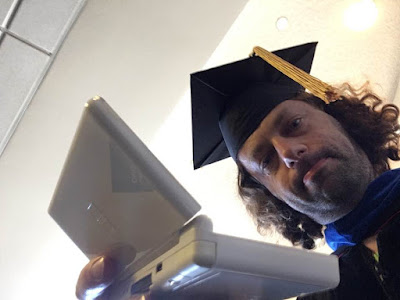 During the Faculty Recession of the commencement ceremony, as professors started marching off the stage, the organist started things off with the theme to Star Wars.

I contend, however, that the Imperial March would have been far more appropriate.
Posted by Mason at 9:28:00 PM No comments:
Labels: commencements, games, me, Nintendo, Nintendo DS, pictures, portable games, UCLA

Network Structure of "Choose Your Own Adventure" Novels

Network structure is very important for 'choose your own adventure' books. (My strategy was to do an exhaustive search, noting any infinite-length walks.) If you don't believe me, you can see for yourself.

Apparently, at least one deli explicitly disallows this. That's odd. (Now I want to go there, just so I can do it.)

At the local deli. What could have happened to make them put up that sign?? pic.twitter.com/7BzPNjFm1L

These print-and-play cards of Women in Science include some nice artwork and some very familiar names. My favorites are the mathematicians, of course.

A couple of years ago, I blogged about playing cards of Women in Computing.
Posted by Mason at 7:17:00 PM No comments:
Labels: awesome, cards, computer science, games, mathematicians, outreach, science, scientists, women

"A Local Perspective on Community Structure in Multilayer Networks"

One of my papers, which came out a few months ago, final got its final coordinates (page numbers, etc.). Here are the details.

Title: A Local Perspective on Community Structure in Multilayer Networks

Abstract: The analysis of multilayer networks is among the most active areas of network science, and there are several methods to detect dense “communities” of nodes in multilayer networks. One way to define a community is as a set of nodes that trap a diffusion-like dynamical process (usually a random walk) for a long time. In this view, communities are sets of nodes that create bottlenecks to the spreading of a dynamical process on a network. We analyze the local behavior of different random walks on multiplex networks (which are multilayer networks in which different layers correspond to different types of edges) and show that they have very different bottlenecks, which correspond to rather different notions of what it means for a set of nodes to be a good community. This has direct implications for the behavior of community-detection methods that are based on these random walks.
Posted by Mason at 9:26:00 AM No comments:
Labels: applied mathematics, community structure, mathematics, multilayer networks, networks, publications, random walks

I had something to say about this question.

(My Ph.D. students get awesome powers, of course! What kind of advisor do you think I am?)
Posted by Mason at 3:34:00 PM No comments:
Labels: academia, Dungeons and Dragons, PhD, power, Quora, snark, social media

This art is amazing! The website Bored Panda described it as "doodling", though it is awesome, epic-level art (whatever you want to call it).

This site is great! (I just found it by googling a specific example for one of my three current paper proofs.) It returns a quick set of numbers for how often different word choices are used in practice.

Here are some cool visualizations of subway maps morphing to their actual geographies.

And if you want to learn about the amount of information to navigate such things, you may be interested in this paper.

(Tip of the cap to Marta González.)