The End of a Decade, with a Fair Starting Day

I'll let you know when my decade ends.

To do that, I'll first need to figure out when it started. ;)

Now, which starting point will allow me to maximize or minimize something interesting...

Tales from the ArXiv: How Many Updates is the Record?

Well, the answer to the question that I posed two years ago was apparently "yes", but the authors did eventually stop uploading updates of their paper to arXiv after another three weeks or so (and five more updates).

I wonder if 16 versions of a paper is an arXiv record? 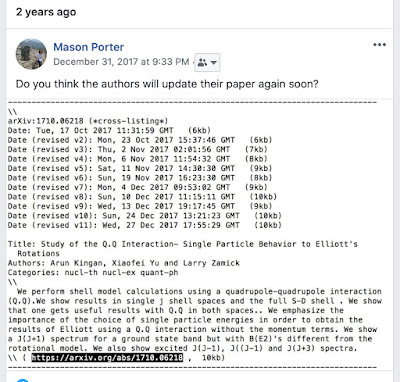 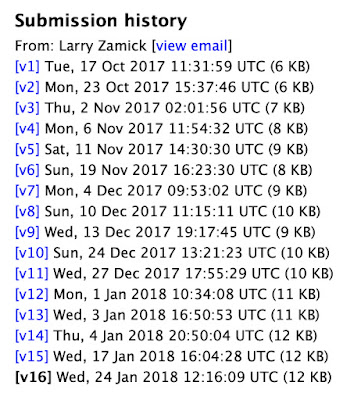 Personally, I think that we should measure chutzpah in a manner that is analogous to how we measure earthquakes.

Example usage: "Social seismologists are reporting that that incident registered as a 7.6 on the Chutzpah Scale, with an epicenter near Westwood." pic.twitter.com/EVQy8XUvC5

Here is my latest set of emoji differential equations.


And in case you want a holiday-themed system of emoji differential equations, here are ones for unsteady precession of a dreidel.

The Three Alternative Branches of Government

Fun Fact: The "Hyperbolic Branch" of government has plenty of shocks. :)

Every answer can result in a new question. — Yiddish proverb

(Tip of the cap to Evelyn Lamb.)

Another of my papers came out in final form today. Here are some details.

Abstract (English version): The propagation of infectious diseases and its impact on individuals play a major role in disease dynamics, and it is important to incorporate population heterogeneity into efforts to study diseases. As a simplistic but illustrative example, we examine interactions between urban and rural populations on the dynamics of disease spreading. Using a compartmental framework of susceptible–infected–susceptible (SIŜ) dynamics with some level of immunity, we formulate a model that allows nonlinear reinfection. We investigate the effects of population movement in a simple scenario: a case with two patches, which allows us to model population movement between urban and rural areas. To study the dynamics of the system, we compute a basic reproduction number for each population (urban and rural). We also compute steady states, determine the local stability of the disease-free steady state, and identify conditions for the existence of endemic steady states. From our analysis and computational experiments, we illustrate that population movement plays an important role in disease dynamics. In some cases, it can be rather beneficial, as it can enlarge the region of stability of a disease-free steady state.

Note: The published paper also has a Spanish version of the abstract.

Today I'll be flying to Vancouver for a few days to visit a friend who I haven't seen in three years. Uncharacteristically for me, I am planning on this being an actual holiday (although I do hope to mostly keep up with simple e-mails to prevent feeling overwhelmed upon my return).

We'll be binge-gaming, and in particular we are going to get as far as we can through Pandemic Legacy: Season 1, which was a gift from my one of recently-finished doctoral students. (The gift actually helped provide an impetus for this trip to happen, as getting a regular set of players for a 'legacy' or other campaign is not easy for me.)

As I'll be playing a Pandemic game, I guess I won't be escaping from networks entirely. :)
Posted by Mason at 3:16:00 PM No comments:
Labels: friends, games, gaming, networks, students, travel, visits

This app lets one simulate cellular automata with emoji!

This may inspire some snark. Possibly.


I forgot about this thing! So much fun. Here's a little zombie simulation I threw together: https://t.co/vyn6zssehU

Tales from the ArXiv: The "Chicken McNugget Monoid"

Yes, there really is a mathematical object called the "Chicken McNugget Monoid", and here is a screenshot from page one of the paper. 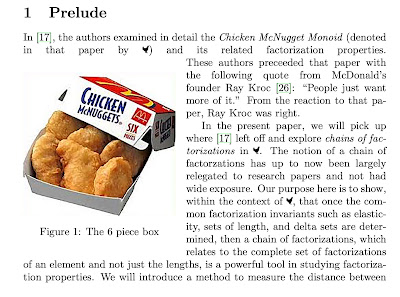 Apparently, this comes from the standard nugget counts in boxes of Chicken McNuggets. Here is one line from the paper: Under regular integer addition, ⟨6,9,20⟩ forms a monoid, meaning the sum of any two McNugget numbers is again a McNugget number. And if this sounds like something out of The Onion, you may be interested in this recent article.

Also, in case you were wondering: Using [17, Proposition 1 and Table 1], it follows that the Frobenius number of 🐤 is 43. This is the largest number of Chicken McNuggets that cannot be ordered using whole boxes of sizes 6, 9, or 20.

"Effect of Antipsychotics on Community Structure in Functional Brain Networks"

We finally have our final coordinates for the published version of this paper, which was an exercise in extreme persistence — the human kind, not the mathematical kind — of the first author Ryan Flanagan. He has maintained a superlative attitude and desire to do this work in the fact of much adversity. Here are some details about the paper.

Abstract: Schizophrenia, a mental disorder that is characterized by abnormal social behaviour and failure to distinguish one’s own thoughts and ideas from reality, has been associated with structural abnormalities in the architecture of functional brain networks. In this article, we (1) investigate whether mesoscale network properties give relevant information to distinguish groups of patients from controls in different scenarios and (2) use this lens to examine network effects of different antipsychotic treatments. Using various methods of network analysis, we examine the effect of two classical therapeutic antipsychotics—Aripiprazoleand Sulpiride—on the architecture of functional brain networks of both controls (i.e., a set of people who were deemed to be healthy) and patients (who were diagnosed with schizophrenia). We compare community structures of functional brain networks of different individuals using mesoscopic response functions, which measure how community structure changes across different scales of a network. Our approach does a reasonably good job of distinguishing patients from controls, and the distinction is sharper for patients and controls who have been treated with Aripiprazole. Unexpectedly, we find that this increased separation between patients and controls is associated with a change in the control group, as the functional brain networks of the patient group appear to be predominantly unaffected by this drug. This suggests that Aripiprazole has a significant and measurable effect on community structure in healthy individuals but not in individuals who are diagnosed with schizophrenia, something that conflicts with the naive assumption that the drug alters the mesoscale network properties of the patients (rather than the controls). By contrast, we are less successful at separating the networks of patients from those of controls when the subjects have been given the drug Sulpiride. Taken together, in our results, we observe differences in the effects of the drugs (and a placebo) on community structure in patients and controls and also that this effect differs across groups. From a network-science perspective, we thereby demonstrate that different types of antipsychotic drugs selectively affect mesoscale properties of brain networks, providing support that structures such as communities are meaningful functional units in the brain.
Posted by Mason at 5:51:00 PM No comments:
Labels: community structure, functional neuroscience, network science, networks, neuroscience, publications, research

"Customer Mobility and Congestion in Supermarkets"

One of my papers just came out in final form. Here are the details.

Abstract: The analysis and characterization of human mobility using population-level mobility models is important for numerous applications, ranging from the estimation of commuter flows in cities to modeling trade flows between countries. However, almost all of these applications have focused on large spatial scales, which typically range between intracity scales and intercountry scales. In this paper, we investigate population-level human mobility models on a much smaller spatial scale by using them to estimate customer mobility flow between supermarket zones. We use anonymized, ordered customer-basket data to infer empirical mobility flow in supermarkets, and we apply variants of the gravity and intervening-opportunities models to fit this mobility flow and estimate the flow on unseen data. We find that a doubly-constrained gravity model and an extended radiation model (which is a type of intervening-opportunities model) can successfully estimate 65%–70% of the flow inside supermarkets. Using a gravity model as a case study, we then investigate how to reduce congestion in supermarkets using mobility models. We model each supermarket zone as a queue, and we use a gravity model to identify store layouts with low congestion, which we measure either by the maximum number of visits to a zone or by the total mean queue size. We then use a simulated-annealing algorithm to find store layouts with lower congestion than a supermarket’s original layout. In these optimized store layouts, we find that popular zones are often in the perimeter of a store. Our research gives insight both into how customers move in supermarkets and into how retailers can arrange stores to reduce congestion. It also provides a case study of human mobility on small spatial scales.
Posted by Mason at 9:01:00 AM No comments:
Labels: applied mathematics, complex systems, markets, network science, networks, papers, physics, research

I am intrigued by this paper, which is called Cipolla’ s game: playing under the laws of human stupidity.

Here is a screenshot to whet your appetite. 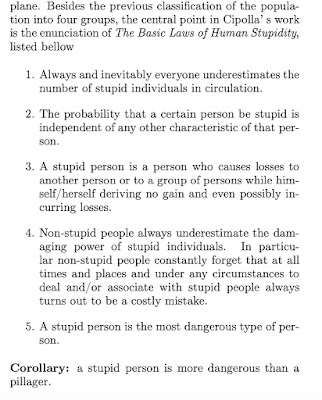 Marvin Miller and Ted Simmons are in the Hall of Fame!

I look forward to seeing people like Lou Whitaker eventually get in as well!

(Given the Harold Baines debacle from last year, there was basically no chance for me to be as annoyed about the 'Veterans Commitee' selections as I was last year at this time.)

Update: The article above has now been updated with the vote totals. Simmons got 13 votes and Miller got 12, and Dwight Evans was next with 8. The rest of the vote totals are as follows: "Dave Parker received seven votes, and Steve Garvey and Lou Whitaker six each. Tommy John, Don Mattingly, Thurman Munson and Dale Murphy all got three or fewer."

Here is take 2 of the Karate Clubbuccino, which is otherwise known as using a cappuccino embedding to depict the Zachary Karate Club network. (Thanks to Sofia Piltz for making this happen.)

(Thanks to Sofia Piltz for making this happen.) pic.twitter.com/Gi0vMbfNQs


In case you ever wanted to see the Karate Club network visualized using a capuccino embedding.

(Thanks to University of Michigan postdoc Sofia Piltz for trying this out for me at BeanBerry Cafe in Ann Arbor. She'll try it with a higher-contrast and more circular picture later.) pic.twitter.com/nqLpcJrfmY

Inspired by a comment in today's presentation, my new goal is to write a mathematics paper that uses the "Feeling" environment.

(This, in turn, inspired the present document. I decided to do this in a style akin to that of the Devil's Dictionary.) pic.twitter.com/UzpWKjQRRV

A Black Box with Weights on the Inside


Stitchfix algos did white elephant where we had to put a clue on the outside. So I made a black box with weights inside pic.twitter.com/Uc7dC2BElM

(Tip of the cap to Adrienne Porter Felt [no relation].)

Because someone had to do it. 🔼

Thanks to all the students and faculty who helped bake cakes! I’ll share the assembly video below. #WorldSoilDay pic.twitter.com/pOtnyMHPgc