When people say 'we use #machinelearning in the business process.'

Today's XKCD, about the algorithmic difference between symbolic differentiation and integration, is superb!

My favorite step of integration is "burn the evidence". ;)

A nice thing to do in Knoxville (say, during a visit to @NIMBioS) is to go to Market Square and take a look at the Tennessee Woman Suffrage Memorial.

Here is a short video, with a full view of the Memorial's historical text: https://t.co/EeWV57Jncyhttps://t.co/UShnfB3Px0

"Hipsters on Networks: How a Minority Group of Individuals Can Lead to an Antiestablishment Majority"

One of my papers came out in final form today. Here is the published paper. And here are some details.

Title Hipsters on Networks: How a Minority Group of Individuals Can Lead to an Antiestablishment Majority

Abstract: The spread of opinions, memes, diseases, and “alternative facts” in a population depends both on the details of the spreading process and on the structure of the social and communication networks on which they spread. One feature that can change spreading dynamics substantially is heterogeneous behavior among different types of individuals in a social network. In this paper, we explore how antiestablishment nodes (e.g., hipsters) influence the spreading dynamics of two competing products.We consider a model in which spreading follows a deterministic rule for updating node states (which indicate which product has been adopted) in which an adjustable probability $p_{Hip}$ of the nodes in a network are hipsters, who choose to adopt the product that they believe is the less popular of the two. The remaining nodes are conformists, who choose which product to adopt by considering which products their immediate neighbors have adopted. We simulate our model on both synthetic and real networks, and we show that the hipsters have a major effect on the final fraction of people who adopt each product: even when only one of the two products exists at the beginning of the simulations, a small fraction of hipsters in a network can still cause the other product to eventually become the more popular one. To account for this behavior, we construct an approximation for the steady-state adoption fractions of the products on \emph{k}-regular trees in the limit of few hipsters. Additionally, our simulations demonstrate that a time delay τ in the knowledge of the product distribution in a population, as compared to immediate knowledge of product adoption among nearest neighbors, can have a large effect on the final distribution of product adoptions. Using a local-tree approximation, we derive an analytical estimate of the spreading of products and obtain good agreement if a sufficiently small fraction of the population consists of hipsters. In all networks, we find that either of the two products can become the more popular one at steady state, depending on the fraction of hipsters in the network and on the amount of delay in the knowledge of the product distribution. Our simple model and analysis may help shed light on the road to success for antiestablishment choices in elections, as such success—and qualitative differences in final outcomes between competing products, political candidates, and so on—can arise rather generically in our model from a small number of antiestablishment individuals and ordinary processes of social influence on normal individuals.


Note: As we write in the paper, "The original hipster was in the network before it was popular."
Posted by Mason at 11:42:00 AM No comments:
Labels: applied mathematics, network science, networks, physics, publications, research

I am flying to Knoxville, Tennessee for a working group (on network neuroscience) at NIMBioS.
Posted by Mason at 9:20:00 AM No comments:
Labels: collaborations, me, network science, neuroscience, research, travel

This also works for academic writing.

"On Brand" Story from Childhood

A Topps baseball card had a batting average that was inconsistent with a player's hit and at-bat totals, so I typed (with a typewriter) and snail-mailed a letter to Topps to inform them that their calculation, their data, or both were wrong. I also asked them what the error was. https://t.co/u3KPrC5YSq


(They answered me. Apparently, the batting average was correct, but the data were entered incorrectly.)

Tales from the ArXiv: Speech-Balloon Detection in Comic Books

There is an intriguing new paper on the ArXiv called Deep CNN-based Speech Balloon Detection and Segmentation for Comic Books.

Choice quote from the abstract: "Qualitative results suggest that wiggly tails, curved corners, and even illusory contours do not pose a major problem."

After seeing this news, now I know for sure that we're living in a dystopia.
Posted by Mason at 5:19:00 PM No comments:
Labels: amusing, Bowser, headlines, news, Nintendo

"He hated it and loved it, as he hated and loved himself.
He could not get rid of it. He had no will left in the matter."
- Gandalf (about social media) pic.twitter.com/aa5nmg2iNx

I don't know the context, but I hope my friends at Ohio State are ok. (Are you still out there, MBI people?)

Welp, it had a good run. pic.twitter.com/BdWfByZlhM

I particularly like that there is a box labeled "Please do not write to me again." 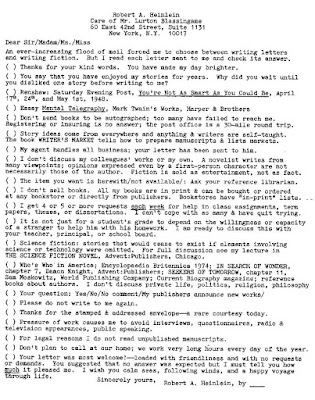 (Tip of the cap to Giuseppe Paleologo, who was responding to Steve Strogatz.)

My Attempt to Save the World

You can't say that I didn't warn you.

The Machines, powered by Artificial Intelligence, have taken over! And massive computations are all giving physically implausible solutions!

We need mathematical models—especially complicated ones with networks and nonlinear systems—to save humanity!

Oh wait... this is real. https://t.co/DljKjpaKSb

Principal Mason Says: The Homework Sword Fight is On!

I have nothing to do with this idea (despite the principal's awesome name), but I am totally on board with this!

In fact, if I were a Principal Mason — in addition to the principal Mason, which is true in my own life, at least — I would definitely do this, now that I have seen this excellent idea. 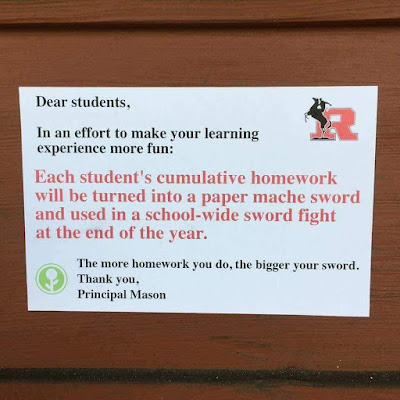 (Tip of the cap to Helen Brown Nazzaro)

A Clever Way to Increase my h-index

So if I violate this, I can improve my h-index...?

This was my contribution yesterday.

Roses are red.
The nodes have heterogeneous degrees.
The network may be heavy-tailed;
but it's probably not scale-free.#ScienceValentine#AcademicValentine

(Technically, "The network's degree distribution may be heavy-tailed;", but that's less poetic.)

These felt dragons are wonderful!

(Tip of the cap to Angela Wilkerson Fitch.)

"I'm in the Best Academic Shape of My Life"

In the spirit of spring training, I feel like we should start new academic years and grant proposals with comments like "I'm in the best academic shape of my life." and "I'm just going to take it day to day this year.", especially if we've had a recent funding/research dry spell or a bad season (or after bad student reviews).
Posted by Mason at 12:20:00 PM No comments:
Labels: baseball, platitudes, snark, spring training

Tales from the ArXiv: Was the AI Eaten by a Grue?

(In my quick glance, I noticed a couple of slightly misleading statements about Infocom and their text-adventure games. For example, one figure implicitly seems to suggest that Trinity came out in the early 1980s, but it actually came out in 1986. I know, I know: I am being very picky.)

I hope that they didn't get eaten by a grue.

Or, given that I mentioned Trinity, maybe they reached into the beehive for a third time?

This thread has lots of great advice for people visiting prospective graduate-school destinations!

Similar ideas apply when considering where to do a postdoc.


It's grad school visit season. You have a ~20 min meeting with someone, and you're considering devoting 5+ years of your life to working for/with them. Are they a great mentor? Or a toxic tormentor? Here's what questions to ask... /1


(Tip of the cap to Suzanne Sindi.)

An Illustrated Guide from the 1950s for Using Telephones

This is pretty fantastic!

"When using the telephone, hold the receiver close to your ear. The receiver is the end without the cord." pic.twitter.com/zvciBAZdg7

"The Use of Multilayer Network Analysis in Animal Behaviour"

One of my articles came out in final form today. Here are some details.

Title: The Use of Multilayer Network Analysis in Animal Behaviour


P.S. There is an easter egg in the paper. Let me know when you find it!