Tales from the ArXiv: An Interesting Journal Name

By the way, it's from this paper.
Posted by Mason at 9:04:00 AM No comments:
Labels: amusing, arxiv, journals, names, papers, preprints


Word(s) of the day: “compass grass”, “clock grass” - common names for kinds of beach grass (Ammophila), given for their habit of inscribing perfect circles in sand when their leaves are swung by the wind.
Photo by @JamesPMarsden (”8.30 on the sand-clock”) pic.twitter.com/NvBN2O4V9e

Chipper Jones, Jim Thome, Vladimir Guerrero, and Trevor Hoffman have been elected to Baseball's Hall of Fame! This follows the pre-announcement polling, which I have been following carefully. They join Alan Trammell and Jack Morris, who were inducted last month by the Modern Era Committee.

Jones and Thome were in their first year of eligibility, Guerrero was in his second, and Hoffman was in his third. I thought Thome might squeak through this year, but I wasn't sure if he'd make it in his ballot debut, and he ended up sailing through with close to 90% of the vote. Jones was on 97.2% of the ballots; this is one of the highest totals in history and doesn't come as any surprise at all. Guerrero jumped to more than 90% of the vote (similar to Roberto Alomar's 2nd-year entry to the Hall years before), so it seems there were a bunch of writers who feel he's a Hall of Famer but not somebody who should enter on the first ballot. Trevor Hoffmann ended up with 79.9% of the vote.

Several people made great gains. Importantly, Edgar Martínez squeaked just past 70% of the vote, and it looks like he'll finally make it in 2019, his last year of eligibility through election by the writers. Mike Mussina jumped from the low 50s to 63.5%, and I think he has an outside shot to make it next year (and he'll certainly make it in 2020). Roger Clemens and Barry Bonds went up a bit, and the only reason they're not in already is because of their extracurricular activities. They will have to wait for some other mechanism, as they're only inching upward. Curt Schilling got back over 50% of the vote, and he'll eventually make it. Both he and Mussina should have been elected to the Hall of Fame years ago, but the writers seem not to be very good at recognizing the quality of many starting pitchers.
Omar Vizquel, who got about 37% of the vote, will get to become the new Jack Morris, so people will be arguing about him for many years. He'll eventually make the Hall, but I don't think he deserves it. Larry Walker got a nice jump to 34.1%, but he's in his 8th year of eligibility, so I think he'll have to wait for some sort of veterans committee. I think he'll make it eventually, and his path is resembling that of Alan Trammell, though it looks like Walker is on the way to doing slightly better than Trammell on his final vote totals.

Among the newcomers who are expected to be in the 2019 Hall of Fame ballot, Mariano Rivera will obviously make it on the first ballot. He's the only newcomer who clearly is going to get elected next year. Roy Halladay deserves to make it and will get a bunch of votes, but I think he'll have to wait a bit, especially with his relatively low win total and how tough it's usually been for starting pitchers to get elected during the past couple of decades. It will be interesting to see how many votes Lance Berkman and Roy Oswalt get. I think Roy Oswalt, who doesn't deserve entry, will not even get the 5% to stay on the ballot. I suspect that Berkman will be underappreciated, but I think he had a Hall of Fame peak (though he falls short on peak length and counting numbers). Miguel Tejada is another interesting player to watch; I think he'll get enough votes to stay on the ballot, though I think he falls short of meriting a spot in the Hall. I think that Todd Helton belongs in the Hall of Fame, but I suspect it's going to take some time. (He may end up with a similar road as Larry Walker, and I think both will ultimately enter the Hall of Fame.) There's also Andy Pettitte, who will probably get a nontrivial (though not horribly high) number of votes, though I don't think he deserves to make it. Maybe he'll become the new Jack Morris?

Update: Here is David Schoenfield's list of winners and losers from today's Hall of Fame results.

How Not to Write a Mathematics Paper: Snarky Edition

Here are some brilliant tips for aspiring mathematics authors!

I don't think I've ever encountered this page before. It's hard to find a favorite. There's also lots of great snark in the explanatory notes.

Here is one bit of snark: "One practical criticism applies to this book as well as a large part of contemporary mathematical production: the various statements are called by different names, such as Lemma, Theorem, Proposition, Corollary; the first three are numbered independently of each other, while the numbers assigned to corollaries are functions of several variables; in addition, numbered formulae have their own separate numeration. The strain placed on the reader by this partial ordering is obvious, but apparently readers seek vengeance on other readers when they turn into authors."

(Tip of the cap to @mathematicsprof.)

It's Still Billy Joel to Me: H. P. Lovecraft Edition

I am highly amused by this connection between Billy Joel's "Piano Man" and H. P. Lovecraft's "Nemesis". Seriously, this is worth a listen. The top one is great!

Though it's still Billy Joel to me!

Headline of the Day: Well Played

Look closely at the various ways that one can parse this headline. ;)


(Tip of the cap to David Kung.)
Posted by Mason at 8:25:00 AM No comments:
Labels: amusing, grammar, headlines, hilarious, politicians, snark

Here's some really nice snark from the people who run a Cleveland bookstore.

I approve of the new xkcd!
Posted by Mason at 8:22:00 AM No comments:
Labels: amusing, awesome, comics, hilarious, meta, quotes, xkcd

One of my papers just came out in final form today. Here are the details.

Abstract: Network structure can have a significant impact on the propagation of diseases, memes, and information on social networks. Different types of spreading processes (and other dynamical processes) are affected by network architecture in different ways, and it is important to develop tractable models of spreading processes on networks to explore such issues. In this paper, we incorporate the idea of synergy into a two-state ("active" or "passive") threshold model of social influence on networks. Our model’s update rule is deterministic, and the influence of each meme-carrying (i.e., active) neighbor can—depending on a parameter—either be enhanced or inhibited by an amount that depends on the number of active neighbors of a node. Such a synergistic system models social behavior in which the willingness to adopt either accelerates or saturates in a way that depends on the number of neighbors who have adopted that behavior. We illustrate that our model’s synergy parameter has a crucial effect on system dynamics, as it determines whether degree-k nodes are possible or impossible to activate. We simulate synergistic meme spreading on both random-graph models and networks constructed from empirical data. Using a heterogeneous mean-field approximation, which we derive under the assumption that a network is locally treelike, we are able to determine which synergy-parameter values allow degree-k nodes to be activated for many networks and for a broad family of synergistic models.
Posted by Mason at 1:19:00 PM No comments:

If any of you want to try explaining an idea using only the ten hundred most common words in the English language, you can try at this page.

I'm on the train to head to San Diego for the 2018 Joint Mathematics Meetings. I'm really excited about it! Among other things, there are more sessions related to things like networks and data than ever before at this conference. And I always like seeing my many peeps from the mathematics world, including friends who I don't get to see at conferences on more specific topics.

Update: Here is a short video of some nice scenery during my train ride from Los Angeles to San Diego. Below is a still shot that I took just before the video and also a picture of me and a statue of the late, great Tony Gwynn. 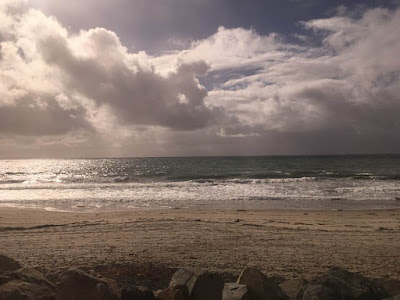 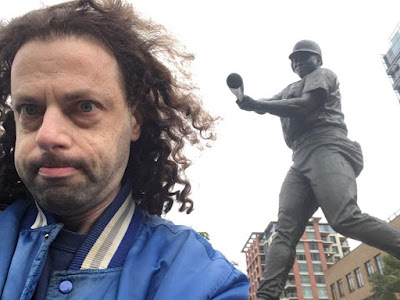 And, finally, here is my tweet after I arrived.

I'll try not to get booed during my talk this year, like I was in 2005. (With people from an impending on-campus faculty interview in the audience.)

You know you've made it when you're booed at a math conference.


It’s so cold!!! But at least the weather has Jenny’s number. pic.twitter.com/CRQlRytWWr


(Tip of the cap to Bruno Gonçalves.)

In my obsession yesterday with the article about the physics of croissants (which has a lovely picture of a croissant network) from the same issue, I failed to notice that the cover article in the January 2018 issue of Physics Today is about Mary Somerville. Here is the cover.
Posted by Mason at 1:09:00 PM No comments:
Labels: mathematicians, mathematics, physics, scientists, Somerville

The Problem With Talking to People

There are two things that I really dislike about talking to people: (1) talking and (2) people.
Posted by Mason at 10:10:00 AM No comments:
Labels: me, people, quotes, snark

The Physics of Croissants

The January 2018 issue of Physics Today has a short article about the physics of croissants. Yummy!


You know you've been thinking too much about 2D networks when your immediate thought, and also @masonporter 's, is to analyze the centrality of a croissant. https://t.co/uvVGfaD5Kk

Calligraphy in an Old Edition of The Lady of Shalott

I recommend looking at this calligraphy while listening to Loreena McKennitt in the background. (And this is one of her very best songs, which is saying a lot.)


Enjoy the outstanding calligraphy and illuminations by Alberto Sangorski in this 1908 edition of Tennyson’s The Lady of Shalott https://t.co/SU4FTrYOkG pic.twitter.com/Aq8ZUlXd0N