The Baseball Hall of Fame Throws a Shutout

There will be no new 2021 Hall of Famers for Major League Baseball. (Curt Schilling would have made it—and his playing career is clearly of Hall of Fame caliber—but he's a collossal dipshit.) None of the "Veterans Committees" met because of the COVID-19 pandemic, so the 2021 induction ceremony will honor the 2020 inductees (along with the broadcasters and writers, who get particular awards).

Here is a tabulation of the 2021 ballot's winners and losers. As usual, I have been following things very closely on the Hall of Fame tracker, so I already had a very good idea of what was going to transpire (with very good estimates of final vote percentages). Now we also have the precise voting outcomes.

Players who will debut on the ballot in 2022 include Alex Rodriguez and David Ortiz.

Update (1/27/21): Here is Jay Jaffe's roundup of how each candidate performed in the voting, as well as their prospects for future enshrinement in the Hall of Fame.

Update (1/27/21): Dan Haren has a fantastic sense of humor. Also check out his Twitter handle, which is an homage to the speed of his "fastball". I love it! (Tip of the cap to Jay Jaffe.)

Update (2/01/21): Here are Jay Jaffe's forecasts of the Hall of Fame voting for the next few years.

One of my papers just came out in final form. Here are the details. 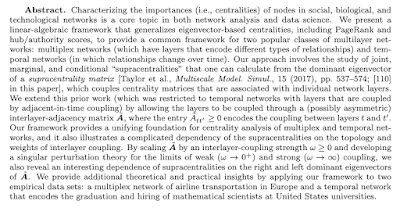 Baseball has lost yet another giant: Hank Aaron died this morning, becoming the third baseball Hall of Famer to die this year already. (Baseball lost quite a few Hall of Famers last year, and we're off to a horrible start this year.) You can read about Hank Aaron's many accomplishments in his Wikipedia entry.

We have lost yet another Hall-of-Fame Dodger: pitcher Don Sutton has died.

Dodger great and Hall of Fame manager Tommy Lasorda has died. He died late last night. Tommy was a lifelong Dodger, "bleeding Dodger blue", with 71 years in the organization. I'm glad that he lived to see us ("us" = The Dodgers) finally win another World Series. He was also great in The Baseball Bunch, which I watched as a kid.

To read some things about Lasorda, in addition to his Wikipedia entry above, here is some reactions from around the sports world (including the brilliant video of an infamous fight that he had with the Phillie Phanatic), and some lovely stories from Tim Kurkjian.

Naturally, no obituary of Tommy Lasorda would be complete without a montage of some of his classical meltdowns.

It's a sad day in the Dodger World. RIP, Tommy.

Update: This article in The Los Angeles Times has some memorable quotes by Lasorda.