Children to be Named Later (Best. Erratum. Ever.)

The excellent new book by Kiss, Miller, and Simon on epidemics and networks also has an erratum that is one of my all-time favorites. (See their website of errata.)

In fact, I think this error is a feature of the book, rather than a bug (especially given that I automatically think of Paul Erdős). By the way, the book itself is awesome, so go take a look at it. Here is a screenshot of the erratum. 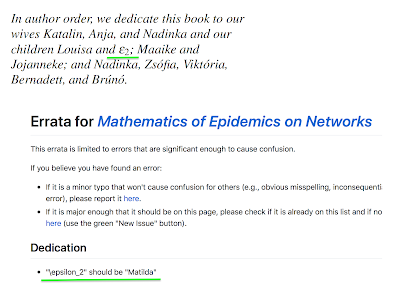 (Tip of the cap to my Ph.D. student Yacoub Kureh for pointing this out to me in our meeting today. This erratum is an instant classic.)
Posted by Mason at 3:58:00 PM No comments:
Labels: applied mathematics, awesome, babies, books, dynamical systems, epidemic models, epidemics, mathematical modeling, mathematicians, mathematics, names, network science, networks

20 Very Obscure, Very Specific Ancient Jobs eg "Nob Thatcher - Also spelled knob thatcher, this delightful occupation may sound like a Medieval insult, but was the term for a wig-maker." https://t.co/iBrkPdUWWK

Stripe orientation appears to be independent of genetic inheritance in Gummy Bears.

This is very, very cool!

Posted by Mason at 8:09:00 AM No comments:
Labels: awesome, computers, social media, twitter

Another of my papers came out in final form today. This work was led by my former (and excellent) undergraduate student Flora Meng. Here are the details.

Title: Opinion Formation and Distribution in a Bounded-Confidence Model on Various Networks

Abstract: In the social, behavioral, and economic sciences, it is important to predict which individual opinions eventually dominate in a large population, whether there will be a consensus, and how long it takes for a consensus to form. Such ideas have been studied heavily both in physics and in other disciplines, and the answers depend strongly both on how one models opinions and on the network structure on which opinions evolve. One model that was created to study consensus formation quantitatively is the Deffuant model, in which the opinion distribution of a population evolves via sequential random pairwise encounters. To consider heterogeneity of interactions in a population along with social influence, we study the Deffuant model on various network structures (deterministic synthetic networks, random synthetic networks, and social networks constructed from Facebook data). We numerically simulate the Deffuant model and conduct regression analyses to investigate the dependence of the time to reach steady states on various model parameters, including a confidence bound for opinion updates, the number of participating entities, and their willingness to compromise. We find that network structure and parameter values both have important effects on the convergence time and the number of steady-state opinion groups. For some network architectures, we observe that the relationship between the convergence time and model parameters undergoes a transition at a critical value of the confidence bound. For some networks, the steady-state opinion distribution also changes from consensus to multiple opinion groups at this critical value.
Posted by Mason at 7:51:00 AM No comments:
Labels: applied mathematics, dynamical systems, network science, networks, papers, physics, publications, research, sociology, students

My mathematical haiku are part of a collection of haiku published in Journal of Humanistic Mathematics in January 2018: https://t.co/ZbG0JEBgL6

(Yes, even my haiku sometimes include sarcasm.) pic.twitter.com/ogPXYmmR9W


(Thanks to Paul Glendinning for the Twitter 'mention', from which I learned that my haiku made it into the article.)
‏

I'll be heading to my first visit to Tennessee to participate in a NIMBioS working group at University of Tennessee.

I'd try to link to a relevant website, except that my internet connection at the airport is glacially slow, so I'm not going to even try for now. We'll be formulating some forward-looking big problems in network neuroscience to think about together and then hopefully start thinking deeply about and trying to solve.

Update: Here is the link to our working group.
Posted by Mason at 10:16:00 AM No comments:
Labels: me, travel

The cover of this 1950s comic book is adorable.


And this was with only a 4th dimension!

This will be great fodder for some math and physics talks... "NO! Don't enter that manifold!"

(Tip of the cap to James Gleick.)
Posted by Mason at 4:59:00 PM No comments:
Labels: amusing, comics, dimensions, mathematics, physics

Tales from the ArXiv: Building on "Seminal but Laconic" Findings

I am highly amused by one of the sentences in the abstract of this paper, which is called "Systematic elimination of Stokes divergences emanating from complex phase space caustics".

The sentence in the abstract reads as follows: Building on the seminal but laconic findings of Adachi, we show that the deviation from second order can be used to rigorously determine the Stokes lines and therefore the region of the space that should be removed.

I think I need to steal the first part of that sentence, and I know that I have felt that way on many occasions (e.g., with respect to work by Nesterenko) in my career.
Posted by Mason at 9:15:00 PM No comments:
Labels: abstracts, amusing, applied mathematics, arxiv, mathematics, quotes, sentences

"Neither Global nor Local: Heterogeneous Connectivity in Spatial Network Structures of World Migration"

One of my papers, which has had a DOI for about half a year, finally has its final publication coordinates. Notably, this is my first paper in a sociology journal. Here are some details.

Abstract: For a long time, geographic regions were considered the dominant spatial arbiter of international migration of people. However, since the late 1970s, many scholars have argued that movements reach beyond contiguous regions to connect distant, dispersed, and previously disconnected countries across the globe. The precise structure of world migration, however, remains an open question. We apply network analysis that incorporates spatial information to international migration-stock data to examine what multilateral structures of world migration have emerged from the interplay of regional concentration (local cohesion)and global interconnectedness (global cohesion) for the period 1960–2000. In the world migration network (WMN), nodes represent countries located in geographic space, and edges represent migrants froman origin country who live in a destination country during each decade. We characterize the large-scale structure and evolution of the WMN by algorithmically detecting international migration communities (i.e., sets of countries that are densely connected via migration) using a generalized modularity function for spatial, temporal, and directed networks. Our findings for the whole network suggest that movements in the WMN deviate significantly from the regional boundaries of the world and that international migration communities have become globally interconnected over time. However, we observe a strong variability in the distribution of strengths, neighborhood overlaps, and lengths of migration edges in the WMN. This manifests as three types of communities: global, local, and glocal. We find that long-distance movements in global communities bridge multiple non-contiguous countries, whereas local (and, to a lesser extent, glocal) communities remain trapped in contiguous geographic regions (or neighboring regions) for almost the whole period, contributing to a spatially fragmented WMN. Our findings demonstrate that world migration is neither regionally concentrated nor globally interconnected, but instead exhibits a heterogeneous connectivity pattern that channels unequal migration opportunities across the world.
Posted by Mason at 3:23:00 PM No comments:
Labels: migration, multilayer networks, network science, networks, publications, social networks, sociology, spatial networks, temporal networks

Tales from the ArXiv: "The Random Walk of Cars and Their Collision Probabilities with Planets"

Well, the title of this paper pretty much says it all.

However, there are also some choice quotes in the paper. For example, I really like this deadpan sentence: We now turn to the long-term dynamical evolution for which we integrate 240 realizations of the Tesla for 3.5 Myr into the future.

The final part of the abstract is also nice: By running a large ensemble of simulations with slightly perturbed initial conditions, we estimate the probability of a collision with Earth and Venus over the next one million years to be 6% and 2.5%, respectively. We estimate the dynamical lifetime of the Tesla to be a few tens of millions of years. (I guess the simulation of 3.5 million years wasn't long enough.)

Well, this is a bit awkward.

There's a new edition of "Surely You're Joking, Mr. Feynman" that just came out this month. Funnily and interestingly, the photo on the cover is the same as before, but the pocket protector is gone. How unfashionable! @dschwa8059 @phalpern https://t.co/wLaCGynpS2 via @amazon pic.twitter.com/7MOrBVnzVa

Our paper in which we — after many years of effort — showed strongly nonlinear Anderson phenomena in experiments is finally out in published form!

Here are some details.

Teaser: Wave propagation is often nonlinear in character, yet the interplay between disorder and nonlinearity remains elusive. Kim et al. use experiments and corroborating numerical simulations to investigate this phenomenon and demonstrate superdiffusive energy transport in disordered granular chains.

Abstract: Energy transport properties in heterogeneous materials have attracted scientific interest for more than half of a century, and they continue to offer fundamental and rich questions. One of the outstanding challenges is to extend Anderson theory for uncorrelated and fully disordered lattices in condensed-matter systems to physical settings in which additional effects compete with disorder. Here we present the first systematic experimental study of energy transport and localization properties in simultaneously disordered and nonlinear granular crystals. In line with prior theoretical studies, we observe in our experiments that disorder and nonlinearity—which individually favor energy localization—can effectively cancel each other out, resulting in the destruction of wave localization. We also show that the combined effect of disorder and nonlinearity can enable manipulation of energy transport speed in granular crystals. Specifically, we experimentally demonstrate superdiffusive transport. Furthermore, our numerical computations suggest that subdiffusive transport should be attainable by controlling the strength of the system’s external precompression force.
Posted by Mason at 9:04:00 AM No comments:
Labels: awesome, condensed matter, disorder, granular crystals, me, nonlinear science, nonlinear waves, physics, publications


And this is why we still need editors in the age of text-scanning software. pic.twitter.com/EiDeW4FiGZ

Please, please, please can we do this for university campus maps? That would be so awesome!

An artist is reimagining England’s national parks in the style of J.R.R. Tolkien’s maps https://t.co/Zx3cFjakKj pic.twitter.com/KdnQGI4Qgg

I promised this to some of my Ph.D. students, so I drew it, and I'm posting it here as well.

I still love the result of this ‘emotion analysis’ of the profile pictures of mathematicians on Twitter.

In addition to these three categories, no face is detected in 24 images. 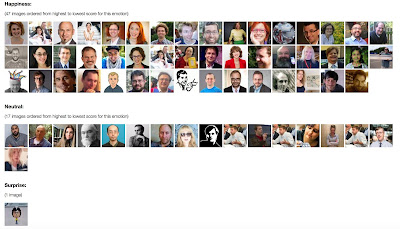 A Dozen Ways to Divide the United Kingdom

There is some great snark in here!


A Dozen Ways To Divide The United Kingdom pic.twitter.com/LuMZ8hC3tG